Jeet Kune Do: The System Without A System®


It Is What It Is: Just a Name!
Jeet Kune Do: The System Without A System® is my own interpretation
of the original Jeet Kune Do (scientific street fighting). My art is based ONLY on my own experiences, years
of research, private lessons and seminar training, which led me to create my own ideas and full understanding
of Jeet Kune Do as a fighting art. Jeet Kune Do: The System Without A System® is NOT as a style,
system or a method of fighting based on someone else’s interpretation of JKD.
Since the death of Jeet Kune Do’s founder, many interpretations of the art have surfaced which has
created massive confusion in regards to exactly what Jeet Kune Do is. Prospective practitioners are confused
as to why there is so many different instructors teaching so many different interpretations of the same art.
Why is this?
The founder of Jeet Kune Do developed the most aggressive fighting art to date because he uses all
arts yet he was not bound by any of them. A JKD practitioner can adapt and fit into any situation at any given
time. That’s what makes JKD unique and different. JKD is not a style, a system or a set way of practicing a
technique. The art is not based merely on technique, but on theoretical principles, philosophies and actual
applications that fit in real life street situations. The unfortunate passing of JKD’s founder left such a big
legacy behind that many of his original students never got to learn the complete art, since he was changing
his method continually over time. Many of the first generation students spread his art the way it was
presented to them through the three schools where he taught (Seattle, Oakland and Los Angeles). Some
followed his original teachings, which in its early stage required the study of Wing Chun Gung Fu, and later
as he progressed he changed his art to Jeet Kune Do.

So why do many practitioners call it different names such as Jun Fan, Jeet Kune Do, Jeet Kune
Do Concept or Jun Fan Jeet Kune Do? What is the difference? There is no real difference. The only
difference I personally see is that most are not UNITED. In other words, some took a different approach to
how they should apply JKD. Some decided to add different arts to it, improve on it or just stick to the original
teachings of the Jun Fan Gung Fu years, which consist of a very strong base and foundation of Wing Chun
Gung Fu as I have. I have absorbed all of the founder’s principles, methods and theories, and taken from
anyone who has ever taught me JKD (which includes first and second generation students of the founder) and
other martial arts the best way they knew how, and created my own expression of Jeet Kune Do, which is
called Jeet Kune Do: The System Without a System®.

Does that make it a wrong or different way of applying JKD? Absolutely not. Am I teaching and
practicing JKD? Definitely! Just like the founder said, “How can I express myself totally and completely?”
He further commented, ”You think a fight is just one kick, one blow?”
So my personal feeling is that JKD practitioners don’t need to stick to one particular way of doing
a technique or movement. In addition, my system is not based on any one person’s set way of doing JKD.
What makes Jeet Kune Do: The System Without a System®, unique? The art is NOT unique. The label is
just another name, which can be wiped out at any giving time and it is not bound by any particular way.
Unfortunately, because of politics, the name of what I teach is simply different. Also, what gives me
knowledge to express myself? What is JKD and what is not JKD? My skills were compiled by learning from
over ten of the top original students of the founder of Jeet Kune Do, and hours of private classes along
with over 30 years of martial arts experience. As a black belt in various styles of martial arts, I have
experienced what works and what doesn’t work. My enthusiasm for Jeet Kune Do has driven me to write a
book with over 460 pages on the art. In addition, I have produced a complete DVD series on JKD.
Just as the founder of Jeet Kune Do intended, I absorbed what is useful, rejected what is useless, and
added what is essentially my own. I have a very informative website dedicated to Jeet Kune Do
(WWW.JKDUS.COM) which is packed with everything I have learned and absorbed over the years
from others who have a love for JKD.

So my advice to anyone wanting to learn JKD is that you don’t need to stick to one particular way of
doing a technique or movement, nor should you base your training on any one person’s set ways of doing
JKD. To look and move like the founder of Jeet Kune Do, you must follow the art step by step just like any

other art, even though you have to go back and learn that rehearsed routine, learn what is behind it, take few
punches and learn to fight on the ground. That way, you are not limited to just punching and kicking and you
are not a fish out of water should a grappling situation ever arise. To walk the same path that he walked you
must follow his principles, methods and theory that he left behind. Once you understand and absorb these
principles, then you liberate yourself from any particular way of doing JKD.
As long as the essence of JKD is presented in an honorable and respectful manner, then it should not
make a difference as to what people call it. Jeet Kune Do was not meant to have a label because its founder
never believed in styles or systems. It is what it is: Jeet Kune Do. So we can refer only to whether you’ve
learned it from different instructors or from the founder himself. This should not change the true meaning or
what lies behind Jeet Kune Do, which is to simply express one’s self honestly. “If people say Jeet Kune Do
is different from "this" or "that," then let the name of Jeet Kune Do be wiped out, for that is all it is,
just a name. Please don't fuss over it” (Bruce Lee Tao of Jeet Kune Do).
Peace, Love, Jkd
Sifu George Hajnasr

”I do not believe in systems or methods of fighting”


What Is “Jeet Kune Do” In My Own Expression?
Jeet Kune Do is the only non-classical Chinese martial art available today. The art is also known as
“Scientific Street Fighting.” Jeet Kune Do translates from Cantonese to “The Way Of The Intercepting
Fist.” Jeet means to stop or intercept, Kune means fist or style, and Do means the way. It was founded by
the late Bruce Lee around 1965, and was accepted and recognized around the world. Unfortunately with his
passing on July 20th, 1973, he left an enormous legacy behind. Jeet Kune Do, the martial art is very direct.
The art does not and cannot remain the same. JKD must change as time changes. It is not rigid but is fluid;
also it favors simplicity and directness.
Jeet Kune Do can be changed and improved upon as time proceeds. Some moves used thousands of
years ago might not work in today’s society. People used horses to travel and they used knives and swords in
combat. Fortunately in this day and age the use of these weapons legal are impractical. Jeet Kune Do is a
process of growing and constantly improving. The art takes the form of whatever works, no matter what style
the practitioner draws his or her chosen tactics from. JKD does not become that style because style tends to
separate people from each other. They might think their style is the only answer for combat, but every style
has its strong and weak points. In Jeet Kune Do, we take the stronger points out of that style and use
whatever works from it but we are not bound by it.
Jeet Kune Do does not beat around the bush. Instead JKD gets directly to the point. Jeet Kune Do is
a ‘chiseling away process’. A diamond cutter cuts away at the rough, losing almost half of it until the beauty
and brilliance of a diamond is revealed. Jeet Kune Do is one’s self-expression outside all fixed patterns. It is a
system with no system. You express the technique. You don’t simply perform the technique-you become the
technique. Don’t become the product of that technique - you don’t hit. Let “it” hit without even thinking of
hitting. Don’t concentrate on just one thing. If you do, you are going to miss all the glorious things around
you. Jeet Kune Do takes the easy way out with the least amount of energy. Jeet Kune Do doesn’t use any
fancy or unnecessary stances, because in real fighting none of the fancy stances work. It might look good, but
looking good will not help in a life-threatening situation. Just simply express yourself through any
unsophisticated movement.
Other martial artists are limited to one style or method of fighting. The students are performing the
system through themselves. They are copying everything the instructor shows them. They, in return, are the
products of that style. Perform, practice and apply the art according to the styles defined techniques and
applications. The art cannot be changed. Heaven forbid the student changes or modifies their particular style.
By that I mean practitioners of most traditional arts are very limited. Jeet Kune Do (JKD) uses no way as way
because “when ever there is a way there lies the limitation.” JKD practitioners use what works in a real fight.

You can change, modify, and add to it, and so “that way it is a continuous growth of knowledge.” Always
keep an open mind and absorb whatever works with the least amount of energy.
However, that doesn’t mean that Jeet Kune Do is all over the place like some people may believe.
What this means is that you are free in your martial art to train in different styles or cross train, as I will
demonstrate in this book. Don’t be surprised if a good Jeet Kune Do practitioner will flow from one system to
another system. If someone wishes to lean towards one system then that’s they’re prerogative, but you’re
limiting yourself. Some fight situations might be in kicking range; others might be in punching range, and
some in trapping range or even ground range. If you lack one of these ranges you will lose no matter how
skillful you are in one style of martial arts. A good JKD practitioner uses everything. You name it - you
should grasp it! The student must still learn the basics and fundamentals so they have a good foundation to
build upon.
Jeet Kune Do: The System Without A System ® Rank! 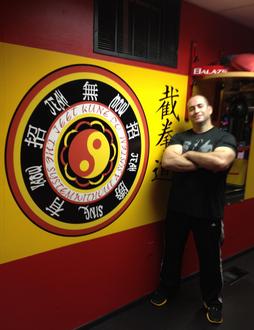 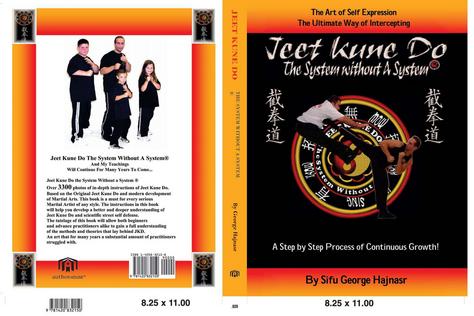