Wing Chun is a traditional form of Chinese Shaolin Gung Fu that uses
speed and deflection rather than brute force to overcome an aggressor.
It is an economical art, with no "flowery" techniques. It is extremely
practical and effective, containing street-fighting applications well
suited to today's modern society. You do not have to be muscularly
strong, super fit or highly flexible to become proficient in Wing Chun
(which makes it one of the few martial arts that can be practiced well
into old age).
The system contains a variety of techniques, including:
Hand blocking and attacks (fist, palm, elbow, finger, elbow and
forearm attacks)Kicks, knees, leg blocking and sweeps Joint locking, grabs and holds Ground fighting Chi (energy)
development Iron Palm Weapons (Wooden pole and Butterfly swords)

There are only three empty handed forms, one wooden dummy form and
two weapons forms in the entire system. The whole Wing Chun syllabus is
contained within these forms and the student will be taught each form in
turn, together with all the applications and theory which will give him
or her an in-depth knowledge of the Wing Chun way of fighting.
History of Wing Chun
An Indian monk while traveling through China noticed that during
meditation the Chinese monks were falling asleep, so he developed a
routine of exercises, including fighting techniques to increase physical
and mental health.
At the time of the Ch'ing dynasty (1644-1911) the Manchus invaded
China and forbade any practice of Martial Arts, which they knew was
going on at the Shaolin temple. The temple was too well fortified to
take by storm so they bribed a monk who showed them a secret entrance.
When the Manchus entered they burnt the temple and killed the occupants,
all that is for five elders who managed to escape, one of these being a
nun named Ng Mui. As the five dispersed throughout China, Ng Mui came
to the temple of the White Crane, which she entered and continued her
vocation.
One day Ng Mui met a woman who was being harassed by a local
landowners son called Wong. Ng Mui told the girl to tell Wong to leave
her alone for a year, in which time she would return and give him her
answer as to marriage. Wong agreed and the girl spent one year being
taught fighting techniques by Ng Mui.
When they returned one year later the girl told Wong that they would
fight, and if he won she would marry him, but if he lost he was to leave
her alone forever. Wong agreed, but she beat him easily. This meant she
was able to marry the man she wanted, Leung Bok Cho.
One day during a quarrel they fought, and again using the techniques
taught her, she won easily. This so impressed her husband he asked her
to teach him the style, which she did. He then passed on the art to
others and to do honour to his wife named it Wing Chun, after her name -
Yimm Wing Chun, which means "Beautiful Springtime". 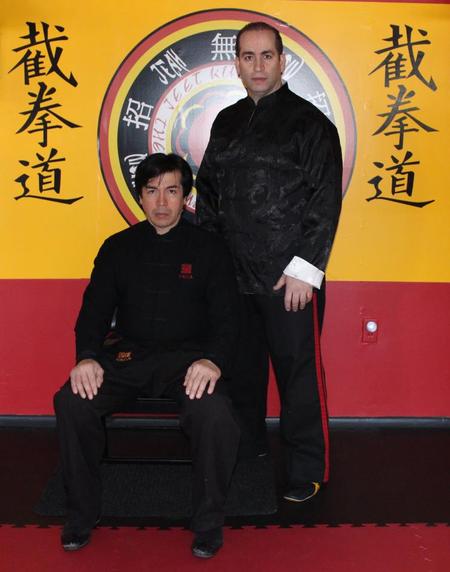 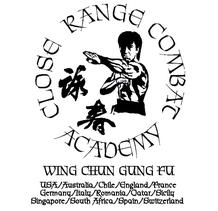