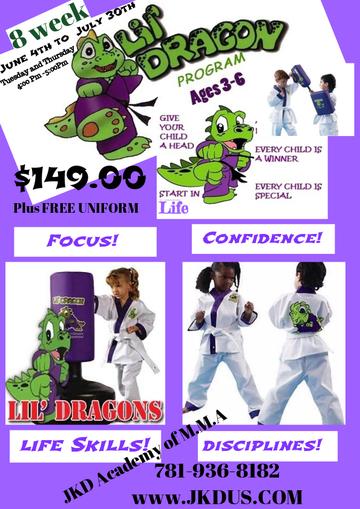 (Open to all Levels) Monday & Wednesday 6:15pm-7:15pm, Saturday 8:30am 9:30am & 12:00pm-1:00pm An energetic cardiovascular workout that aids in better health, weight loss, stamina, and stress relief while burning calories and toning the overall body through a series of punching, kicking, resistant bands, kettle bells, battle ropes, obstacles, and various other movements. This class is geared towards all levels, low impact and high impact.  No two classes are the same which makes a more motivating, challenging and fun workout.  (Wear comfortable non constrictive clothes, no socks/shoes allowed.)

ENROLL NOW! Women Kick boxing Kickboxing provides for an overall cardiovascular workout that aids in weight loss. It also helps to tone the overall body through a series of punching, kicking and various other movements. Women find kickboxing allows them to receive a cardio and resistance workout at the same time, according to American Fitness Professional and Associates (AFPA). Total-Body Exercise Kickboxing for women is a total-body exercise, according to AFPA. Kickboxing will work out the entire body and not just target areas. Kickboxing allows for women to strengthen, tone and reduce fat all at the same time. Since kickboxing is a total-body workout, women will also increase flexibility, burn calories, improve coordination and increase cardiovascular fitness. 5 Signs of Depression These 5 Signs of Depression Will Shock You. See The Causes Now! Depression.DailyLife.com/5-Signs Sponsored Links Self Defense Kickboxing for women can be used as a means of self defense, according to AFPA. During kickboxing classes, the instructor focuses on teaching kicks, punches, knee-ups and bobbing and weaving. Participants doing kickboxing also learn how to gauge distance and landing punches and kicks. Most moves will be practiced on bags to help with landing the move on a particular object. The bobbing and weaving, kicks, knee-ups and punches can all be used for self defense if ever needed. Stress Relief Kickboxing can be used as a form of stress relief as well. With stress, it produces enzymes that lower the amount of endorphins. During kickboxing and various other types of exercise, endorphins are released in the body that relieve pain and aid in decreasing depression, according to AFPA.

is a relatively new combat sport that was brought to public attention with the advent of the Ultimate Fighting Championship in 1993. It brought the Brazilian concept of Vale Tudo fighting, or anything goes, no-holds barred fighting, to worldwide attention, throwing fighters from different styles against each other. While Brazilian submission specialist Royce Gracie won the first tournament with ease, today's fighters are much more well-rounded. History When the UFC was created by Art Davie and Gracie, their intention was to pit fighters from different styles against each other in order to determine the best styles of fighting. It was also designed as a showcase for Gracie's family style of Brazilian jiu jitsu, which Gracie's brother, Royce, used to devastating effect as he submitted all his opponents to win the first UFC. Grappling became one of the key components of MMA training and modern fighters cross-train in striking, wrestling and grappling. Outlawed Fighting Skills Fight Moves Federal Agents & The Army Don't Want You To Know www.FightFast.com/Outlawed-Moves Sponsored Links Training The best MMA training programs cover a range of skills. Gone are the days where one-dimensional grapplers submitted strikers with no knowledge of the ground game. While fighters will normally favor one area of fighting, a well-rounded fighter needs to be able to survive in every area of the game or face being overwhelmed outside his comfort zone. Furthermore, he will need to be able to put the separate aspects of the game together in actual MMA sessions. Features MMA training is often split into the individual components of striking, wrestling, and submission grappling. In addition, you must work on your strength and conditioning. Because of the numerous demands on your time, the best MMA training programs must be efficient. Generally, you will want to focus on the basics, the simple, most high percentage techniques such as the jab and cross, the double leg takedown, and positional work on the ground. You need to ensure that you are training smart and resting as well, otherwise you will be unable to perform to your best.